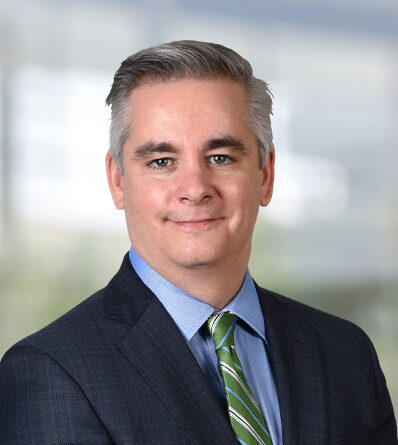 What’s one of your defining successes?

Gaining a comprehensive package of entitlement approvals and city-funded incentives for a client to undertake a community-transforming project whereby a holistic health and lifestyle campus would be constructed on property, the development of which is pivotal to unleashing critical investment to an area long suffering from disinvestment and disinterest.

Jon Baker is a member of Wyatt’s Real Estate & Lending Service Team. Jon focuses his practice on zoning, land use and development, and associated administrative proceedings throughout Kentucky, as well as liquor licensing law. Prior to joining Wyatt, Jon worked for the Jefferson County Attorney’s Office, where he served as general counsel to the Louisville Metro Government, and primarily advised the Metro Council, the Board of Zoning Adjustment, the Planning Commission, and its various committees, on zoning and land use matters in the largest planning unit within Kentucky. As a zoning and land use attorney, he has secured land entitlement approvals in numerous Kentucky counties, providing clients with green lights to proceed with their respective land development needs, whether those needs include residential, commercial, industrial, institutional or mixed-use developments. Jon has extensive experience in administrative processes related to local general plans, detailed plans, subdivision plans, zoning applications, conditional use permits, variances and waivers. Jon is well versed in local, state and federal laws applicable to vested rights, non-conforming use rights and takings matters.

Wyatt can assist applicants needing to take development projects through every phase of development from pre-application assessments to final certificates of occupancy, including advice and representation through every legislative, administrative, and political process. Jon works with public and private, profit and non-profit developers and land users. Mr. Baker is a frequent speaker on state and federal zoning and land use laws, as well as real property development.

Working within Wyatt’s Real Estate & Lending Service Team, as well as closely with Wyatt’s Environmental and Construction attorneys, Jon and Wyatt can provide clients with a one-stop shop for representation of land development and real estate matters.

Jon’s experience in alcoholic beverage sales and licensing issues includes advising manufacturers, distributors and retailers on alcohol related legal matters. He has assisted national and local companies and individuals in securing required licenses and permits necessary for the sale or distribution of alcoholic beverages in the Commonwealth of Kentucky, including national restaurant and hotel chains, convenience stores, package liquor stores, convention centers and other entertainment centers, as well as for-profit and not-for-profit organizations hosting or sponsoring festivals, sporting events, or other special events. Jon also represents licensees in alcoholic beverage enforcement actions, both at the local and state levels.

M.B.A., University of Kentucky Gatton College of Business and Economics; 2002